Expansion of speed gates in the global turnstile market 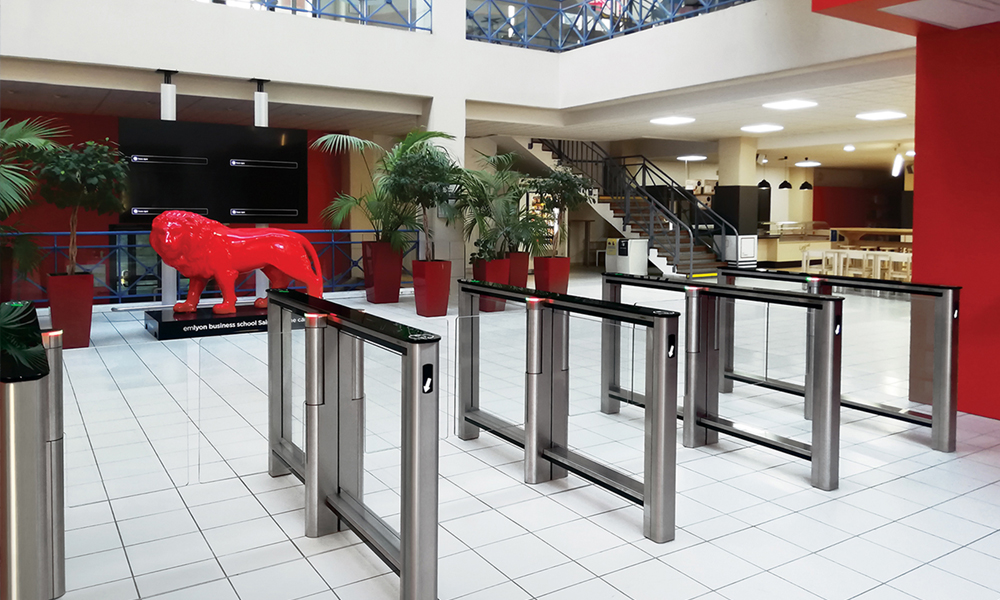 Speed gates (the turnstiles with swing or sliding panels) nowadays are confidently leading the global turnstile market, demonstrating sustainable growth. According to the research of the British analytical agency IHS Markit, the market share is expected to increase by 7% over the next 5 years.

The market growth of speed gates is due to a number of advantages of this type of turnstiles that best meet today's market demands. These advantages include a convenient touch-free passage, high throughput rate, and easy integration with additional equipment. 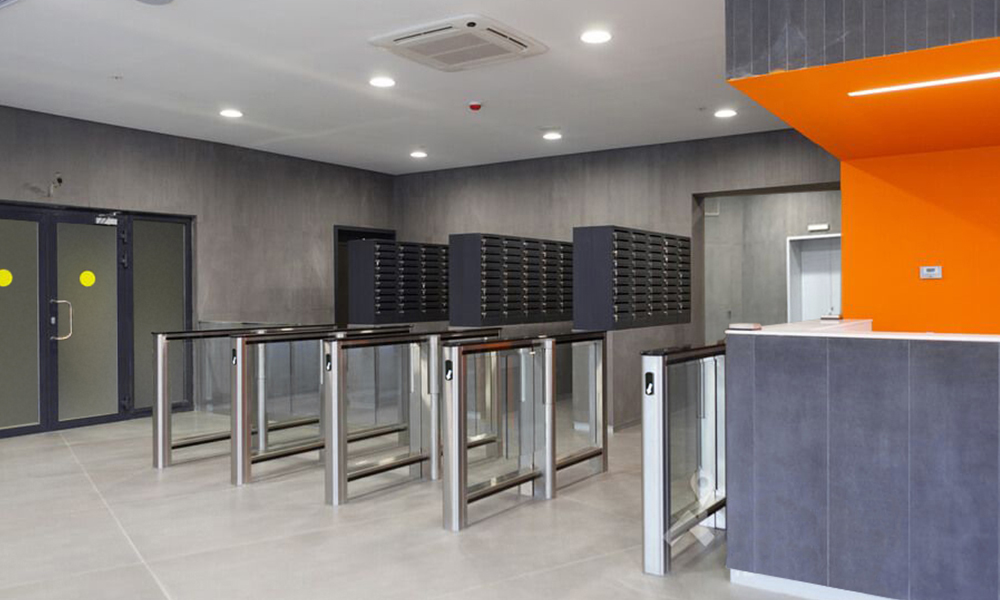 If earlier speed gates were installed mainly at the entrance offices of companies, banks, enterprises, now it is a popular solution for residential complexes, university campuses, schools, and even kindergartens.

Compared with tripods and box tripod turnstiles, speed gates provide not only protection from unauthorized access but also touch-free passage, fast emergency exit, and organization of passageways of the required width, thus creating a comfortable environment for people with reduced mobility, children, and pet owners.

When receiving an authorization signal, speed gates open automatically. Optical sensors detect the presence of a person in a controlled area and allow preventing “tailgating”. Besides, optical sensors ensure safe passage for children and animals. Among all types of turnstiles, speed gates are distinguished by the high throughput rate that allows using this type at public facilities: airports, train stations, stadiums. According to analysts of IHS Markit, the global expansion of the metro system in the most densely populated countries of the world in India and China is one of the main drivers of growth in the speed gate market. The active construction of new stations with turnstile installations determines the demand for speed gates, it is this type of turnstiles that has the maximum throughput, which allows preventing the formation of queues even upon an intensive flow of passengers. Speed gates are installed at transportation facilities all over the world.

According to the data from Sita Air Transport IT Insights, 77% of airports and 71% of airlines will test and implement face recognition systems by 2021. Today, such solutions are used at the largest airports in the USA, Australia, Hong Kong, and the Netherlands. Speed gates can be supplemented with special brackets for integration with face recognition terminals. To check documents without the participation of employees of the facility, speed gates are equipped with document recognition terminals. 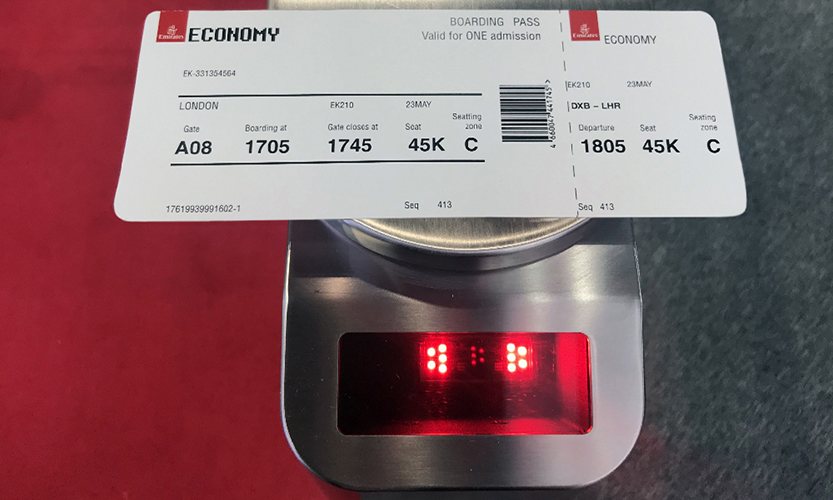 Barcode scanning is carried out by scanners installed on special front panels. This solution improves the verification process, the system permits or denies access and opens the turnstile automatically.

The design of stainless-steel covers allows simplifying the integration of speed gates with additional equipment. Such design also increases the durability of turnstile top covers.

Some speed gate models allow installing readers not only on brackets but also under turnstile top covers, other models, for example the ST-02 speed gate, allow embedding both a reader and a controller. The speed gates can be integrated with card capture readers at sites with a large flow of visitors and the need to withdraw visitor passes.

According to Marketwatch 2020 research, the following companies are included in the rating of the world's leading turnstile manufacturers:

In the rating of 20 companies, PERCo is the only Russian brand. The company exports the products to 92 countries around the world. In our article, we will review the speed gates of Digicon, PERCo, Manusa, Alvarado, Dormakaba, Cominfo, Fastlane Security, Gunnebo, and Boon Edam. The line of speed gates of the Brazilian manufacturer Digicon today is represented by the Slide and DGate models.

The Digicon turnstiles are installed, in particular, at several metro stations in Rio de Janeiro and entrances of the Furnas electric company. 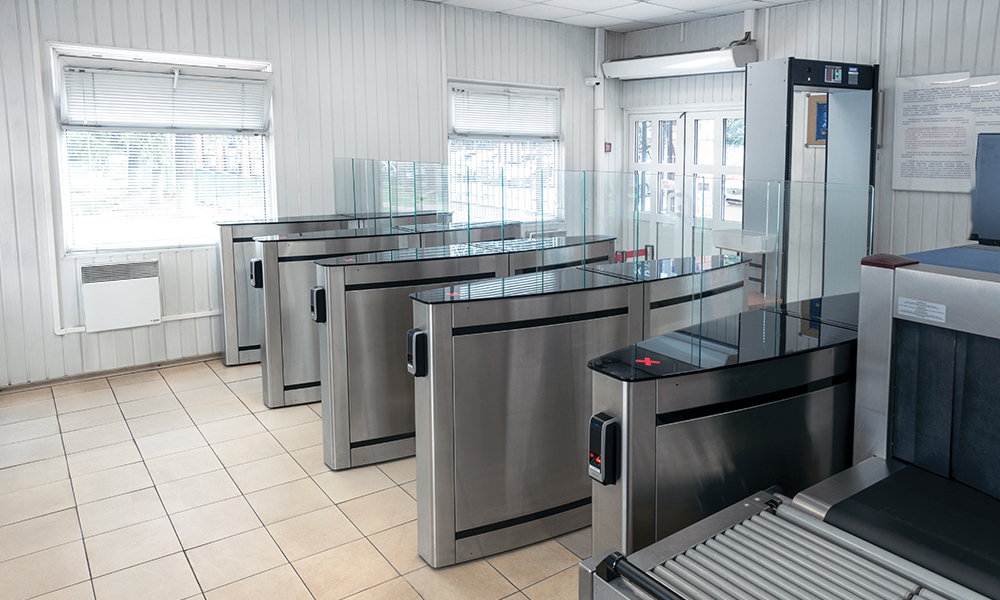 At the moment, the PERCo speed gates series is represented by the ST-01 and ST-02 models in various modifications.

The ST-01 speed gates series includes models with a built-in card capture reader and a front panel for a barcode scanner, which simplifies the installation and doesn’t affect the entrance design. The speed gates can be equipped with a bracket for the face recognition terminal.

The easy integration with additional equipment allows adapting the speed gates to different sites purposes. In the Baltic Cinamon cinema chain, speed gates are equipped with a special extended glass cover for food and beverages for the convenience of viewers when they present their tickets. At the Indian branch of Goldman Sachs bank, speed gates are supplemented with a fingerprint scanner stand.

The ST-02 speed gate is distinguished by sliding panels. The passageway width also can vary depending on the modification. The characteristics of this model are similar to ST-01- throughput rate of 60 people per minute, infrared sensors for safe passage and “tailgating” prevention, automatic unlocking in case of an emergency or power failure.

ST-02 speed gates were chosen for installation at the entrance of the largest automated air traffic control center in Russia, located at Vnukovo airport, Moscow. The high throughput rate of the ST-02 speed gates allows organizing access control in conditions of an intense flow of people effectively — the staff works in six shifts. Eleven ST-02 speed gates are installed in the Moscow office of Yandex. Due to the growing global demand for speed gates, the PERCo products line is extended with a new speed gate ST-11. The ST-11 speed gate is a perfect solution for limited spaces due to its compact design. 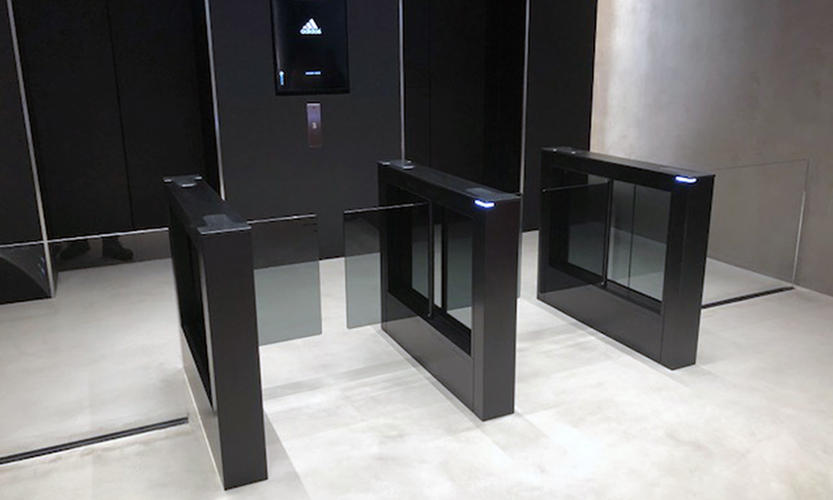 The manufacturer's product line includes several models of speed gates with swing and sliding panels under the common name Glassgate. Despite the common name, the speed gates significantly differ in shape, width, material, panels type, and other characteristics. All Boon Edam speed gates are equipped with optical sensors to control the passage area. In case of an emergency, the turnstile panels open automatically. Both swing and sliding types of turnstiles provide the capacity of 25-30 people when the turnstile is completely closed after each passage. The turnstiles can be integrated with barcode and fingerprint scanners, access card readers, and keypads.

The speed gates are made of glass and stainless steel. The passageway width can be 510 or 910 mm, the barrier height — from 980 to 1800 mm. For the Lifeline Speedlane turnstiles, the passageway width varies from 500 to 915 mm. The barrier height can be increased on request. Moreover, the turnstiles can be painted in the colors of the RAL catalog and branded at the customer’s request. For example, there are speed gates with swing panels in the London office center The River Building. 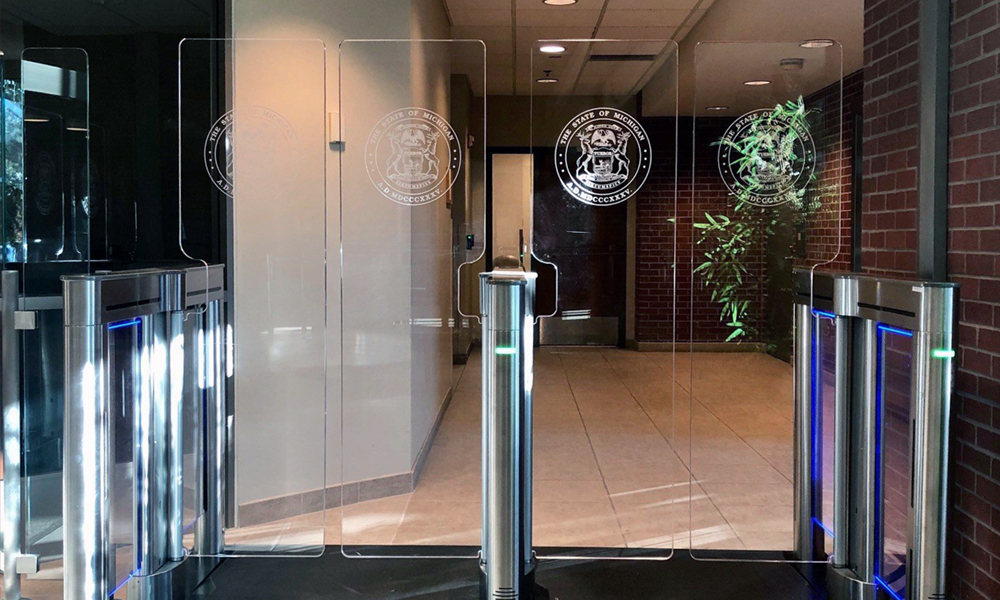 In the speed gate line of the American manufacturer, the latest unit is the SU5000. The SU5000 turnstile with swing panels is made of stainless steel and glass. The speed gate is equipped with optical sensors to control the passage area. By request, the following options are available: various colors, LED indication, etching a logo on panels, and a stand for additional equipment.

The throughput of SU5000 is up to 30 people per minute. The turnstiles operate with RFID / NFC ID and barcode readers, and can also be integrated with ticket systems. The passageway width can be 723 or 926 mm, the barrier height is 1165 or 1749 mm. The SU5000 turnstiles are installed, in particular, in the administration building of the state of Michigan, the USA, the Walmart chain stores, and at many other facilities. 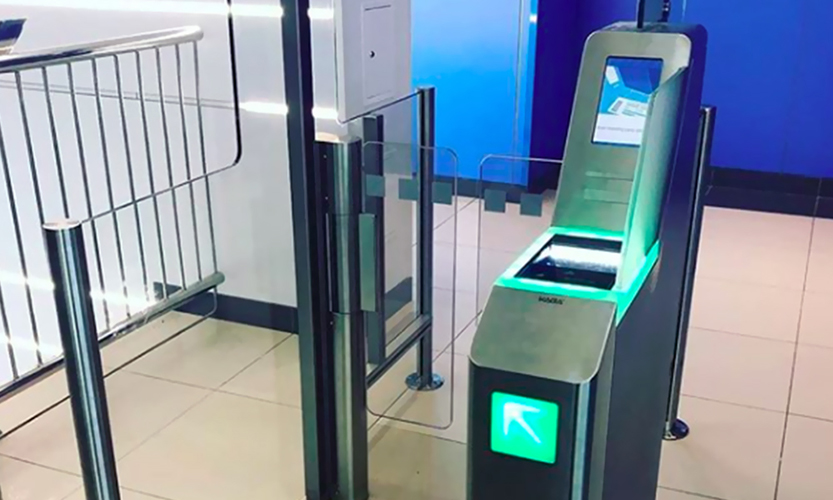 The Swiss manufacturer produces three models of speed gates, joined in the Argus series: Argus 40, Argus 60, and Argus 80. All turnstiles are made in aluminum housings with swing panels and can be painted in 12 suggested colors. The speed gates are equipped with optical sensors to control the passage area. The Argus 60 and Argus 80 turnstiles have LED indication of the passage area.

The passageway width can be 650, 900, 915, and 1000 mm. The barrier height is 990, 1200, 1400, 1600, or 1800 mm. The Argus-series speed gates can be integrated with the additional equipment: access card readers, barcode and fingerprint scanners, face recognitional terminals. For example, the Argus speed gates with barcode scanners are installed at the airport in Minsk, Belarus. 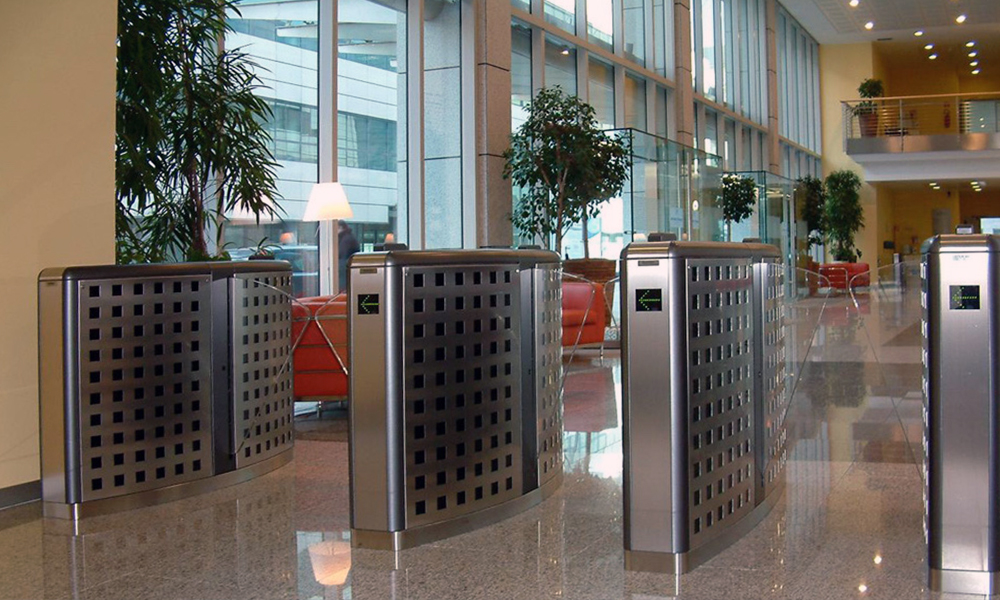 The SpeedStile FL series include turnstiles with a different barrier height of 1000, 1200, and 1800 mm. The increased passage width is also provided – 900 mm. The turnstiles of both series are made of stainless steel and glass. The turnstiles throughput rate is 40 people per minute. In case of an emergency, the panels remain in their current position. The turnstile can be equipped with an additional battery that automatically opens panels upon power failure.

The SpeedStile BP and FP models are speed gates with sliding panels. The barrier height of the SpeedStile BP series turnstiles is 900 mm, of the SpeedStile FP, is 1200 or 1800 mm. The housings of both models are made of stainless steel and painted plastic. The SpeedStile turnstiles are available in “normally open” and “normally closed” versions. The passage area is controlled with 6 infrared sensors in the "normally closed" version and 14 sensors in the "normally open" version. The Gunnebo turnstiles are installed at transport and entertainment facilities, business centers, and enterprises. 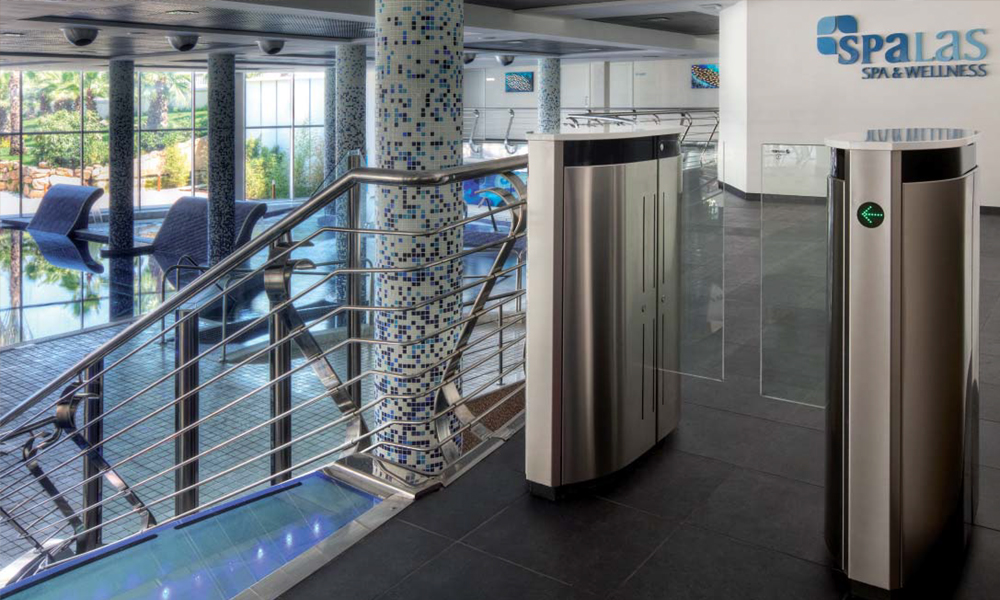 Express Gate is the speed gate with sliding panels made by the Spanish manufacturer. The housing is made of stainless steel, the top covers are made of wood or artificial stone in several colors. The panels are made of glass, the height and width can vary by customer request. One of the options is a turnstile with full-height glass panels. Upon request, the passageway width can be increased for the passage of people with reduced mobility.

In case of an emergency or power failure, the panels open automatically. The turnstiles are equipped with access card readers, fingerprint scanners, and face recognition terminals. The Express Gate turnstiles are installed in university campuses, hotels, and enterprises. 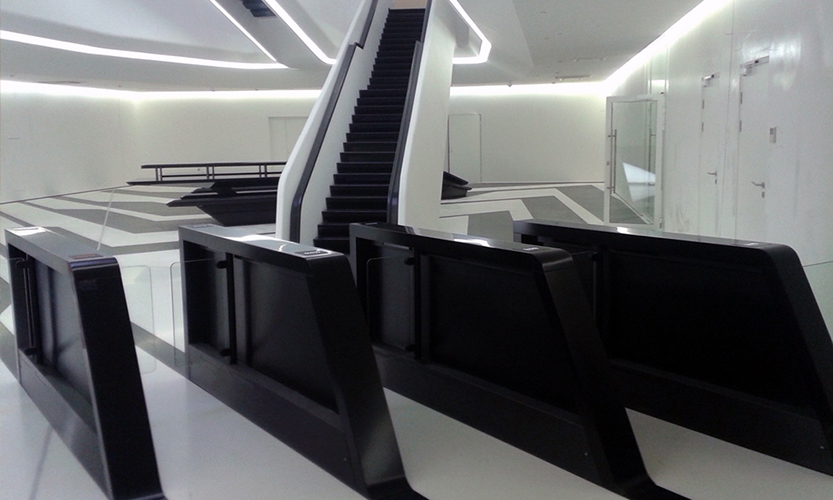 The Czech company Cominfo produces turnstiles with swing and sliding panels under the common name Easygate. The new model – the Easygate Superb turnstiles – are made of stainless steel and glass and can be painted in various colors. There are different types of surface finishes: brushed, polished, or bronze stainless steel. The turnstile top cover can be painted in a selected color. The turnstiles are equipped with 24 pairs of optical sensors at the top and bottom of the turnstile. This model has visual and sound indication of the passage.

The turnstiles are equipped with a built-in access card reader and card capture reader. Barcode and fingerprint scanners can be integrated as well. The passageway width can be 550, 650, or 920 mm. The barrier height — 990 and 1800 mm. Cominfo turnstiles are installed in Dominion Tower Business Center (Moscow), Flow Building Business Center (Prague), Siemens office (the Netherlands).

If you don't want to use «cookie» files, please change browser settings.